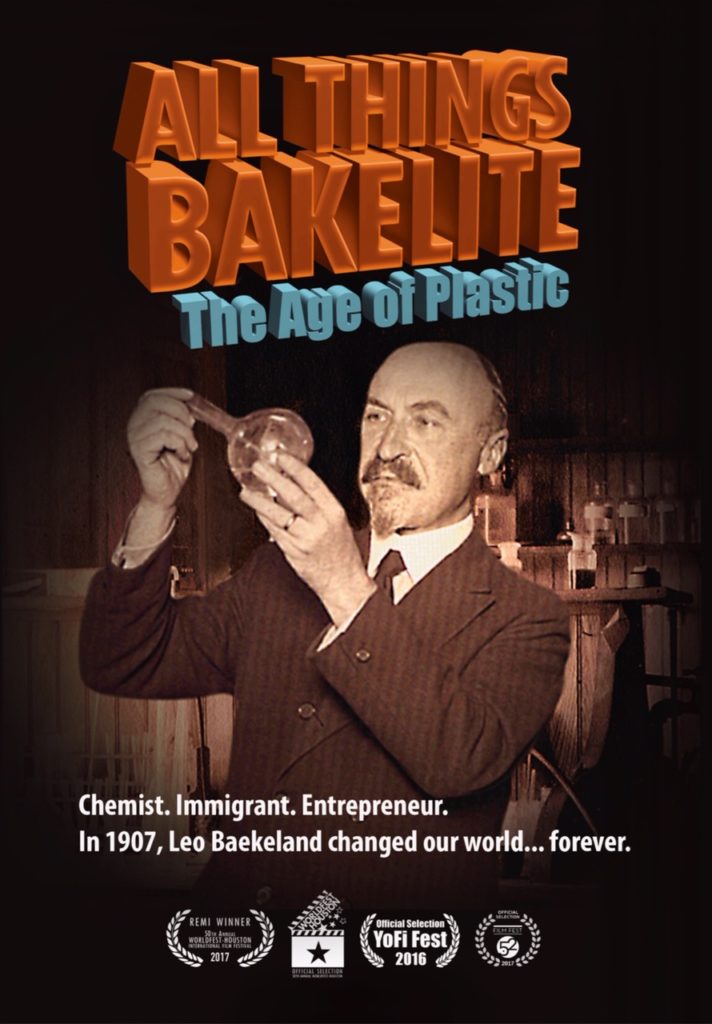 ALL THINGS BAKELITE: The Age of Plastic
A Film by John Maher

Once, all things were classified Animal, Vegetable, or Mineral.  That categorization of our world changed one day in 1907, when a determined chemist working in his home laboratory in Yonkers, New York discovered an entirely new kingdom of things and gave it a name: Bakelite. It was the first wholly synthetic plastic and it ushered in an explosion of new man-made materials and objects that have since permeated our lives.

All Things Bakelite: The Age of Plastic, a film by John Maher, explores the life, the work and the import of Leo Hendrik Baekeland, the “father of modern plastics”, who was responsible for one of the most transformative discoveries of the 20th century. The primary source and impetus for this illuminating film is one of the great grandsons of Baekeland himself, Hugh Karraker, who is the film’s executive producer.

“I wanted to celebrate Baekeland’s life,” Karraker said. “His invention had a huge impact on our lives, but little is generally known about him.”

The film is indeed a celebration of Leo H. Baekeland—his genius, his innovation, and of a progressive era in America that defined us as a nation. Karraker spent over ten years researching his great grandfather’s life, and had access to his mother’s notes on Baekeland’s meticulous collection of 62 diaries. Karraker brought all this to filmmaker John Maher and the result is an hour-long film that is a both a joyous and a provocative exploration of a subject relevant to everyone.

Maher makes history come alive as he weaves interviews with Karraker and other family members with beautifully realized period re-enactments of Baekeland—seen as a curious boy growing up in Ghent, Belgium, then as a persistent chemist and inventor in New York, and later as an old man reflecting on the toll that running the business of the Bakelite Corporation had taken on his life. Archival footage, intimate family photos, and first-person accounts transport us back to the dawn of the modern age when individuals like Baekeland, Thomas Edison, Henry Ford and others led a revolution of innovation with their inventions.

The film presents perspectives from an ensemble of accomplished scientists, historians, artists and musicians, whose occupations are neatly wrapped in plastic. These experts reveal how nothing humans have created is quite like Bakelite in its versatility and varied applications. From hard-core industrial uses to fine art creations, Bakelite is found everywhere from distributor caps to collectible jewelry.

Craig Mikhitarian’s lively editing and Martin J. Fegy’s original score set the pace and tone for a film that is full of surprising facts, profound insights and humorous moments. Entertaining and informative, the film delights with musical performances that capture the wonder, as well as the curse of Baekeland’s alchemy; for while Bakelite and its descendent products became essential to our lives, they have also created serious environmental consequences. All Things Bakelite: The Age of Plastic confronts this double-edged sword head-on, raising an existential conflict even Leo H. Baekeland faced as he questioned the value of his miracle material. It is an inspiring, thought-provoking story that explores the promise and the pitfalls of genius and innovation. All Things Bakelite: The Age of Plastic is suitable for all audiences interested in the human drama that underlies history, science, business, and design—with the surprising twist that the nature of plastic reveals the nature of people.

As Katarina Posch, Professor of Art and Design at the prestigious Pratt Institute says in the film, “Bakelite is the soul of America.”  All Things Bakelite: The Age of Plastic celebrates that soul in all its enduring glory.

All Things Bakelite: The Age of Plastic is a production of JEM Films, directed by John Maher and presented by executive producer Hugh Karraker.